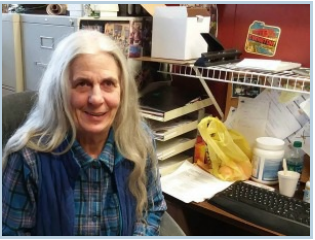 Custodian Holly Cordary hadn’t anticipated being a custodian for longer than her
temporary placement through the State Hospital and Division of Vocational Rehabilitation
(DVR) to gain work experience through the B.O.C.E.S….. 14 years ago.
“When she first came here and said ‘Hi’ to us she had her head down, and now she will
make eye contact and will make some conversation, “Mike Williams, B.O.C.E.S. Executive
Director said of Holly.” We had no obligation to keep her on after a period of time, it was
just a chance to get her out to develop her work skills and we put her on, and we’ve never
been unhappy with that decision. In fact, we kept the job open when she got hurt [she had
a knee injury that laid her up for several months] we just filled it with subs until she got
better.”

Echoing his thought was Facilities Specialist Trudy Biorn, Holly’s immediate supervisor,
who said Holly had only ever called in sick twice in 14 years, other than her knee injury
then took a few months to heal.

“Well, she’s gained so much confidence in herself,” Trudy said when asked what she thought the benefit was to Holly in having a career of her own. “When I asked her about retiring [cause she’s 62] she said well, as long as I’m healthy I’m gonna keep working!”

“I work as a custodian, I wash the tables and mop the floors and vacuum and clean the
whiteboards,” Holly shared. Regarding her working relationship with her boss Trudy,
Holly said she appreciated that “She’s very direct and I’m able to understand what all she
has.”

Trudy shared that Holly has become like family throughout their years of working
together and they’ve shared life experiences outside of work, including helping Holly move
to a new residence much closer to work, making Holly’s commute a much easier one as she
walks or rides her bike.

“Well, as long as I show up and they still like me I figure I still have a job,” Holly
concludes.